skip to main | skip to sidebar

We know that you have all been waiting for it, and here it is. The 1st Annual Jacksonville Bicycle Casino.

A Fun, Free Event for the Whole Family

Bring your bicycles and hang out for a whole day of nothing else. You are welcome to bring your own tent and set up a booth to show off your bikes, talent, or company’s craft of any kind. There will be a designated bicycle show area for you to show off your unique and just plain loved bikes.

Parking and Camping (either by tent or camper) will be available free of charge. Hotels are less than one mile away at I-295 and Commonwealth.

For more information or to setup a company booth, contact:

Charlie Fetzer
904.388.0612
Email lsschwinn@bellsouth.net
Posted by LakeShore Bicycles & Fitness at 11:55 AM No comments: Links to this post


Now that the Tour de Cure is over, it is time to begin training for the next local two day bike event. The MS-150 is going to be October 3-4, 2010 this year. Luckily, so that your training, and actual ride, for the MS-150 is safe your FBA First Coast Chapter Director and NFBC President, Jeff Hohlstein, is providing a special Bike MS Traffic Skills 101 Course. It is recommended for all Bike MS riders and team captains, and any cyclists of any skill level. 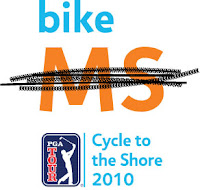 Posted by LakeShore Bicycles & Fitness at 5:45 PM No comments: Links to this post


Bike Month this year is packed! All of these events have at least been mentioned on our Facebook Page once, except for the Cargo Bike Picnic (thank you Bike Jax for the information). Also, all of these events are free and open to the public. 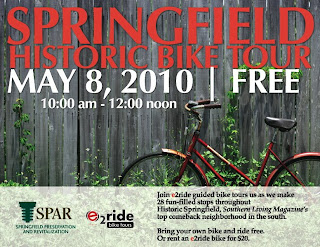 Join Ready 2 Ride Bike Tours and SPAR as we leisurely make our way through the historic district, enjoying the interesting history, unique architecture, and beautiful tree canopy along the way.
Bring your own bike and ride for free, or rent one for $25. Meet at Three Layers Cafe: 1602 Walnut Street. 32206. (corner of 6th &   Walnut). 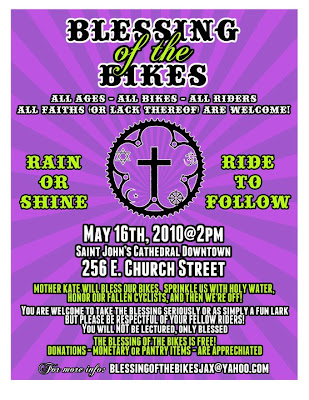 4. Ride of Silence
Location: LakeShore Bicycles & Fitness
Time: 7:00 pm-8:30 pm
Date: May 19
Join cyclists worldwide in a silent, slow paced ride (max.12 m.p.h.) in honor of those who have been injured or killed while cycling in public roadways.
Cyclists wil take to the roads in a silent procession to honor cyclists who have been killed or injured. Although cyclists have the legal right to share the road with motorists, the motoring public often isn't aware of these rights, and sometimes not aware of cyclists themselves.
The Ride of Silence is a free ride that asks it's cyclists to ride no faster than 12 m.p.h. and remain silent during the ride. There are no sponsors and no registration fees. The ride, which is held during bike safety month, aims to raise the awareness of motorists, police, and city officials that cyclists have a legal right to the public roadways. The ride is also to show respect for those who have been injured and killed.

5. Bike To Work Day
Location: In information below
Time: In information below
Date: May 21
Give it a try! Biking to work and school takes some planning and effort, but once you get the hang of it you’ll like it. Organized group rides to downtown will depart from 3 locations in Jacksonville; Arlington, Mandarin, and Westside. Group rides will depart at 7:00 AM and arrive downtown at Hemming Plaza for a 7:30 – 8:00 AM continental breakfast. Each group will be accompanied by members of the Jacksonville Sheriff’s Office, and will include a bicycle shop van to transport riders’ belongings. No assistance is provided for return home trip.
Three free bicycle commuting workshops will be held Monday May 17 from 6:00 PM to 7:00 PM at local bike shop locations. Champion Cycling will host work shops in Arlington, 904-724-4922, and Mandarin 904-262-5744. Lakeshore Bicycles & Fitness, 904-388-0612, will host a Westside clinic. All bicycle commuter workshops are free and open to the public.
For those riders interested in acquiring their (BOB) bicycles on buses permit, they are no longer required. Please visit JTA website for video instruction to use Bicycles on Buses.


Almost forgot, Tour de Cure is May 22, 2010. We will be there for repairs.
Posted by LakeShore Bicycles & Fitness at 5:50 PM No comments: Links to this post